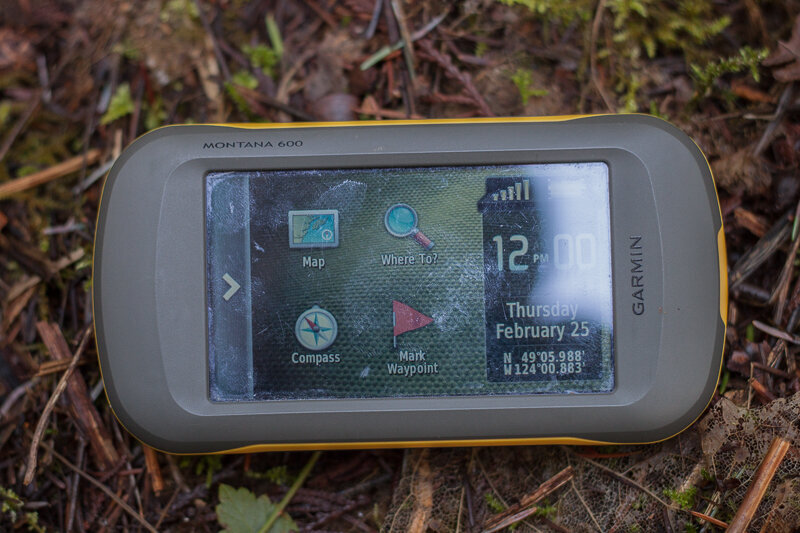 This first part is a bit of a story about the demise of my Garmin Colorado 300. Skip to the second part for the Montana 600 review.

I’ve had the chance to use a few different GPS over the last couple years. They were all Garmin but they all had different features that I could test out and see if I liked. There were things that I liked and things that I didn’t like. I used my friends of families when I could so I didn’t have to buy my own. I finally got one of my own and opted for the Garmin Colorado 300 because of the slightly bigger screen and faster navigation method than was the standard at the time.

Little did I know that the Colorado wasn’t going to last very long. Garmin discontinued it soon after I got mine. Fortunately I never had any problems with it and aside from one little thing I never liked about the interface, it served me well adventuring over many kilometers dirtbiking, hiking, skiing and running.

The only big problem with it was that you could only have one saved track showing at once on the map. For the most part this wasn’t a problem. If you wanted to follow a trail you displayed the track and away you went. It was an issue when I would go to areas that I had been before and had saved tracks from. I wasn’t sure where each track lead and where I had been already. I could cycle through the tracks, displaying each one in turn to see where they lead but that was incredibly time consuming. In the end, without any updates from Garmin, I was stuck viewing only one track at a time.

Fast forward to a few weeks ago. I was heading out to check out a climbing area I hadn’t seen yet on my dirtbike. The power lines and dirt roads were rough but fairly clear. My Colorado was firmly attached to it’s handlebar mount and directing me where to go. I was following a track from a friend. On the way back, roads sloped mostly downhill. Not a problem for my knobby tires, I’ll just go slow and lay off the back brake so I don’t skid too much. I was almost back out onto the pavement and one my way home when I noticed something missing from my handlebars.

In the middle of the last little hill I came down, the Colorado and popped loose from hit’s mount and gone sailing down onto the rocks. If you aren’t familiar with the Colorado, it’s got a wheel above the screen for navigating through the menus. That had popped right off. The screen had a good gouge in it. It wasn’t turning on. This wasn’t looking good.I searched for a good 15 minutes for the wheel but came up empty-handed. I tossed the remains into my bag and headed home, wandering what would come up my mangled GPS. On one hand, I wasn’t very happy about having to spend a few hundred dollars to get a new gps unit. On the other hand, a new line of Garmin’s had just come out and promised to be one of the sweetest trail GPS yet. Sad or excited. I wasn’t sure which.

I in touch with Garmin, whom, to my surprise, directed me to their repair shop in Canada. For a decent fee plus shipping I could get a refurbished Colorado. Could I get a credit towards a new one? Nope. Ok, so another dilemma; Do I wait a few weeks and pay to get a refurbished version of a gps I don’t really like sent my way, or do I check out the brand new GPS at my local shop, Valhalla Pure.

I know which one is more fun.

So needless to say, I checked out the new gps units. I knew the Garmin 62 series would be nice, and there was the Oregon line that had the touch screens as well. Then there was the primo, top-of-the-line radness that Garmin had just released called the Montana. At first glance, it was entirely impractical for hiking and really anything else that I’d want to do with it.

The 62 had the best antennae you could get out of any of the GPS. But it still had the tiny little buttons that were so clunky on the 60csx and 78 series I had used before. Nice for finding things and tracking but terrible if you wanted to jot down a waypoint name. Ten minutes later you can have a nicely named waypoint.

The Oregon series is about the same size as the 62 but has a touch screen. That’s nice, solves the problem of entering waypoints. You get a nice touch screen to add your comments and waypoint names too. It wouldn’t take forever. I think the screens had been updated since the first versions that were almost impossible to see in the sun. A possible ding against the Oregon’s though.

Then I played with the Montana. Large yes, but not much bigger than a 78 series I had used before. A laundry list of new features definitely piqued my interest.

My Colorado was actually able to do this but I didn’t use it much. I didn’t have a premium subscription to Geocaching.com and didn’t get the hints downloaded to the unit so I had to write them down anyways. I decided to try the whole deal out. I have a premium membership now and have found 4 geocaches with the Montana. If you you geocache this is definitely the way to go. No paper and a couple clicks to get all the info from Geocaching.com to the unit and back again. My only gripe with it is that you can’t click on the geocache on the map and get the hint for it. You have to go through the list of geocaches and find it through there.

It’s like holding a big iPhone. All you do is flip the unit on its side and you’ve everything turns for you. It’s definitely my preferred way to look at the map and to type in waypoints. I wish the keyboard was set up exactly the same as the iPhone’s because that’s what I’m in the habit of typing. I keep hitting the shift key when I think I’m hitting something else. I went from almost never renaming waypoints to writing full sentences about them. It’s just so nice to do with the landscape touch screen.

Enabling and disabling tracks on the map

My big problem with the Colorado was solved with the Montana. You can show and hide any tracks you want on the map. If you want to do a bunch, it’s going to take a while. You can only do one at a time. It would be a definitely improvement if they could make it easier to do a bunch at once.

I almost didn’t buy it because it has a lithium ion battery back for power. Don’t go scoffing that decision by Garmin though. They changed it up and made a really smart decision afterwards to add the compatibility of the battery pack OR 3 double A’s. The battery pack recharges right in the unit so when you have it plugged in at the computer, it’s charging for your next adventure. If you kill the battery out in the woods, pop those 3 spare double A’s in there and away you go. 16 hours for the pack and 22 with the double A’s.

This was half the reason I ended up being it. I wanted a Nuvi, one of the in-car GPS that talks and does that great stuff. I didn’t want to buy both though. Throw the Montana into it’s powered car mount with a speaker, load up some road maps and it will talk to you just like a Nuvi. Perfect. A solid trail GPS and a Nuvi in one. I haven’t actually used this feature yet as I’m waiting for the car mount to arrive at Valhalla Pure. I’ll throw up an update when I get a chance to test the vehicular side of things. I’d like to get a handlebar mount for the dirtbike as well but I’m hesitant to have another incident that killed the Colorado.

The other reason I bought the Montana. The screen is huge. 4 inches to be exact. It’s bigger than an iPhone. When you are trying to see where trails, logging roads and possible routes go on the screen of your GPS, it just can’t be big enough. The old Oregon’s had some coating on the screen that made it very difficult to see in the sun. No problems with the Montana. I was out on the weekend with it in the sun and no problems at all. No squinting, no hiding in a dark room just to see the screen. The touch screen makes all the difference in the world with navigation and typing out waypoints and geocaching notes. What would take at least 5 minutes with buttons or a roller takes less than 30 seconds on the touch screen. I am worried how on long the screen is going to last bouncing around in a backpack or in the elements. I think a hard case for over the screen is going to be on order.

Bundles of waypoints and tracks for each adventure

This might just be a new update for Garmin’s Basecamp software but now you can bundle waypoints and tracks and ship them around on and off your device. They call it an Adventure. A perfect name for a group of things. You can also add images to that if you have pictures on your Montana. I didn’t get the version with the camera but one has a 5 megapixel camera. The photos are geotagged and uploaded to your computer with the tracks and waypoints.

And that is the story about how I got a Garmin Montana 600 in my pocket. I would say it’s time to head out on an adventure but it’s more likely that it’s time to hit the sac! If anyone’s got a good story about their GPS, feel free to share it in the comments!

previousGeocaching: A Modern Day Treasure Hunt
nextSkiing on an Angle: A Review of Sidewinder SV Jacket from Arc’teryx