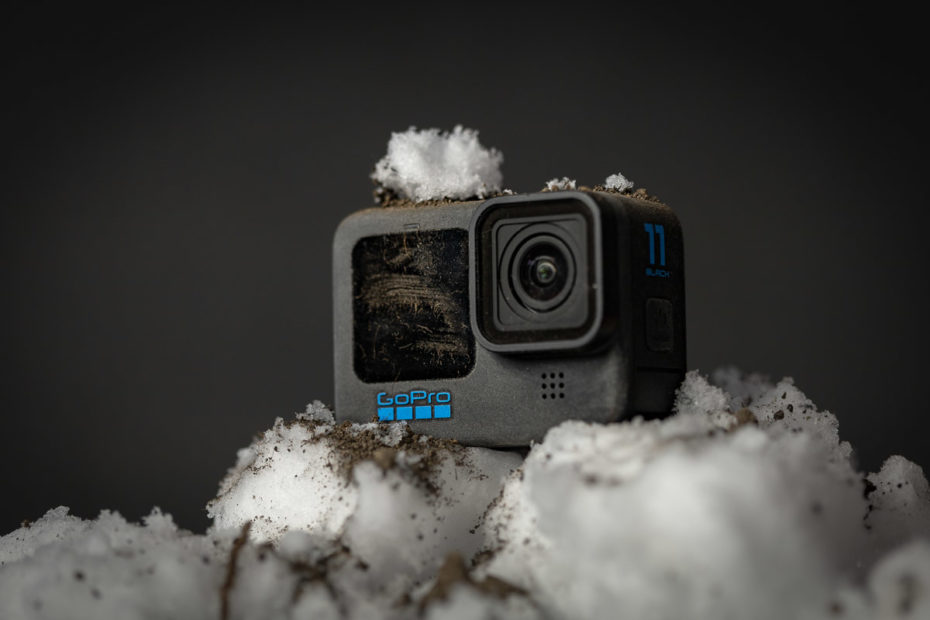 And this year, again, they continue to push the boundaries of tiny, tough cameras with the Hero11.

We got our dirty mitts on the brand new camera so today we’ll have a look at the latest camera in the series, the GoPro Hero11 Black.

More test footage and photos will be coming soon. We just got a big dump of snow here so it take us a bit to dig out!

The Hero11 is packed with features. Many are similar to the Hero10 from last year but there are still some meaningful changes. And there’s one big one that makes it all worth it.

See the Hero10 vs Hero11 section below to compare it with the last version.

Ok, that’s a nice big list. Let’s look at what they all mean and, most importantly, if they work well.

Inside the GoPro is a computer chip called the sensor. It’s what ‘takes’ the photo and converts it into a file we can see. These are always different shapes and sizes for each camera.

GoPro sensors have long been a 4:3 aspect ratio that you see in the image below. This is about the shape of an old TV. This works great when you’re making a horizontal video for a TV or widescreen. It doesn’t work so good when you want the awful vertical video for phones these days. I know, we all have to make them for phones.

With the new 8:7 sensor, you can still crop images and video down to shorter (but still wide) 4:3 and 16:9 aspects. But with the taller 8:7, you can still get a full size 9:16 vertical image or video at the same time without sacrificing any quality.

Another benefit to the taller sensor is being able to see a wider view higher and lower when it’s mounted. This is great for chest mounts when mountain biking or views where you need to see up more.

The new sensor also enables an even wider digital lens called HyperView. HyperView can see an insane amount in one show, albeit with a lot of distortion around the edges because it’s so wide.

8:7 is the only option in these modes:

8:7 is one option in video with these resolutions and frame rates:

HyperSmooth 5.0 with AutoBoost And Horizon Lock

This is all the stuff for stabilization, or in other words, keeping the footage steady while you fly along the trail. Having a camera strapped to your helmet is fun but when the final footage is bouncing all over the place, it’s hard to use it for anything.

HyperSmooth 5 is the stabilizer on the Hero11. The stabilization from GoPro over the last 3 years has been insane. Running and jumping down a rough trail with the GoPro in my hand still looks nice and smooth on the computer after.

AutoBoost is new in the Hero11. It automatically adds more or less stabilization as you go. If the camera detects a lot of bumps, it will zoom in a bit and increase the stabilization. When things get smoother, it zooms out to get more pixels in the frame.

Horizon levelling has been in the GoPro series for a few years. The camera automatically keeps the horizon level for you as you flail around with the camera.

The Hero8 couldn’t do it in camera but the Quik app could add it for you.

The 9 and 10 handle the levelling for you and keep things level up to 45 degrees. Some of the aspect ratios can only do up to 23 or 27 degrees. Once you go past the limit, it just rotates like a normal camera.

A separate Max Lens Mod is available for the 9 and 10 which enables full 360 horizon leveling but it’s another thing to buy.

Now the Hero11 has it all built in. No apps or extra lens mods to buy. The 11 can track the horizon through a full 360 rotation no matter how far you go as long as you’re on a linear video mode.

GoPros have always been able to take photos and, while not amazing, they are getting better and better.

Like a point and shoot, the controls and zoom are basic.

You can enable SuperPhoto, HDR, standard, or RAW modes for photos with a Linear or Wide lens. Standard is straight out of camera. HDR takes a couple frames and uses the best exposed parts of each and SuperPhoto will choose between a few modes automatically trying to get the best highlights and shadows through the whole image.

RAW (.gpr) files are an option now so if you’re into editing your photos, you aren’t stuck with just jpeg.

With the Quik app we can just take frame grabs from any video. Frame grabs are just saving a single frame from the video as a photo.

If you’re already taking a video of something, pause on the composition you want for a second and you can grab that frame later.

The frame grabs can be up to 24.69 megapixels from the 5.3k video. The 8:7 aspect generates the the largest photo. The other aspect ratios have fewer pixels.

The Hero11 can zoom up to 2x digitally but there is no physical zoom on it. This has always been the case with GoPros. Switching from the wide to linear lens will make it appear zoomed in a little bit more.

The Hero11 now comes with Easy and Pro controls. It’s set to Easy when it first comes out of the box.

With Easy mode, you just pick whether you want highest quality or best battery life and then GoPro will pick the other settings for you. With a couple sliders, you can still pick what slo mo and digital lens you want but that’s it.

Pro controls are just the regular GoPro buttons like the 9 and 10 have. To switch to these, swipe down, left and tap Controls.

GoPro came out with a new battery for the Hero10 and now its included with the 11 out of the box. GoPro says it lasts 38% long and it’s better in the cold.

From our testing outside and in, the Enduro battery seems to get about 10 to 20 minutes more battery life depending on the temperature and the mode you are in. The greatest differences are with the higher, more demanding video modes. The Enduro works better in the cold.

The 2 screens from the Hero10 are back.

I love the new front screen and more responsive back screen. The screens still aren’t iPhone-level responsive but it’s far better compared to the 9, which was a bit slow.

There are 4 modes for the front screen: Off, Status (the number of shots you’ve taken, like the old GoPros), Actual Screen and Full Screen.

Actual Screen crops in and shows you exactly what you’re filming the correct aspect ratio. Full screen zooms in and fills the centre of the screen. I usually have it on Full screen so I can see a bit more but that means it cuts off the side a bit.

The GoPro subscription comes with a bunch of stuff but more importantly it’s a big discount on the new camera if you get it from GoPro.com.

With the subscription you save pay $50 USD for the subscription and then save $200 off the camera. So you’re coming out in the end saving $150 on a new camera. It renews automatically for $50 a year.

GoPro has an app that let’s you manage your media and edit quick (Quik?) videos.

With Quik you can:

You can also just subscribe to all the features of Quik with the unlimited cloud backup for $12.99/year.

Quik Free version gets you:

Quik Subscription version gets you:

GoPro already had night photography modes but they’ve added a couple more to make it even easier. These are the equivalent of long exposures on a DSLR or mirrorless camera.

The 3 modes are: light painting, car trails and star trails. Each hold the shutter open for longer to let in more light. These modes need a bit more practice to see how long you have to let the light in but they’re super cool when it works.

So is the GoPro Hero11 Black any good?

Absolutely. It is the best action camera or small video camera we’ve tested. It doesn’t do 360 but it does just about everything else.

If you are wanting to do mostly video with some wide photos, then the Hero11 is all you need. The video and stabilization is ridiculously good. You don’t need any sort of gimble or software to do it on the computer after. The 5.3k is nice and crisp and more than enough to crop down to 4k for YouTube or other places you’re filming for.

You might not need the 11 if you already have a 10 or a 9 and are happy with it but if you are just getting a new one or want to upgrade the 11 is absolutely recommended from us.

Check out the bottom of the post for explanations of each of these features.

Does the Hero11 have 2 screens?

Yes, just like the 9 and the 10, the Hero11 has a large touch back screen a small full-color front display.

What is the Hero11 Black Mini?

The Hero11 Black Mini is a Hero11 Black with no screens. It’s 20 grams lighter since it doesn’t. have any screen. It’s also $50 cheaper. With no screens it’s going to be tougher to throw around. There are only video modes with the mini.

What is a frame grab?

Instead of stopping to take a photo, you can just take a frame out of the video you’ve already shot.

Is the lens cover water repellent?

Yes with a chemical coating. Don’t lick it. It is removable as well.

What does 10-bit color mean?

The Hero11 has 10-bit color, or 1 billion colors, to make it more flexible with editing.

Is the Hero11 good for photos?

Yes, the SuperPhoto mode makes great photos. It can’t zoom much though so you have to be close to your subject.