Skiing on an Angle: A Review of Sidewinder SV Jacket from Arc’teryx ** This review covers the 2009 version of the Arc’teryx Sidewinder.

A couple years ago I had the amazing chance to get into a Sidewinder SV jacket and pants from Arcteryx for cheaper than I had ever seen them. Needless to say I jumped on the chance.

After a couple of seasons snowboarding, skiing and dirtbiking in them, I have to say the whole setup is pretty bomber. I’ll save the in depth review of the pants for a future post so for now here’s my thoughts on the Arcteryx Sidewinder SV jacket.

Keep in mind this is the version of the jacket from a couple seasons ago. I haven’t had a chance to see the brand new copies although I’d assume they’re quite similar.

Mine is just plain black. They have some sick colours from this year and last if you’re into the bright stuff but the only choice I had was black. I didn’t mind, black goes with everything. Now that I’ve got too many jackets, all for different purposes, and they’re all black, I’ll be looking for something with a bit of colour in my next shell.

Arc’teryx describes the jacket as the ticket for gnarly backcountry skiing. I’d say they would be on the mark. It’s got a RECCO avalanche reflector, a clear pocket on the arm for your ski pass, a snow skirt, nice arm cuffs and a good long length to it so you get less of that snow up your shirt next time you do a header into the powder. The hood is helmet compatible so you can keep your brain bucket on even when it’s snowing cats and dogs. The face fabric on it is thicker than most jackets to withstand extra gnarly weather. After running through numerous branches and other rough objects skiing and dirtbiking, I’d say it’s pretty tough. Knock on wood, no holes to speak of.

The biggest different between the Sidewinder and other jackets is how they’ve built the zipper into the jacket. It’s the standard waterproof zipper from Arc’teryx but it curves to the right at the top. 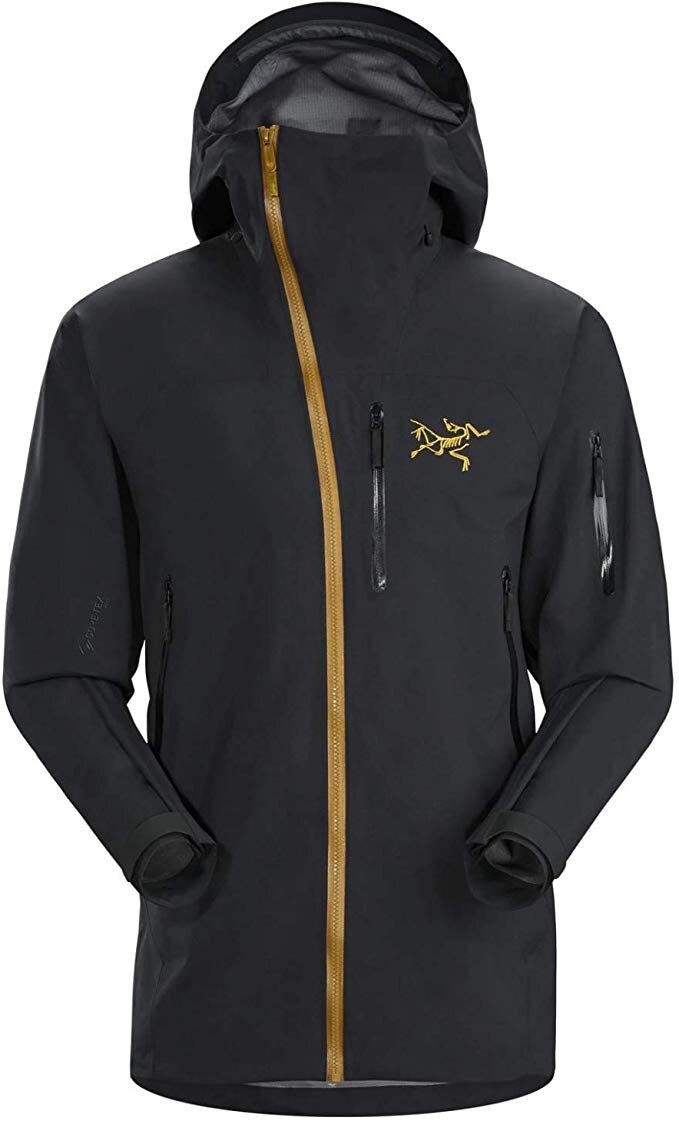 2019 version of the Sidewinder

This helps prevent the 5-zipper pileup right in front of your face when you’ve got a bunch of layers on that all have zippers in the center. It works as promised giving you that little extra breathing room instead of a mouthful of zippers. Therein lies the problem though.

I thought the idea of moving the zipper to the side would be great. I found it ok and nothing to write home about. It does move it away from you face but that moves the stiffness of the zipper to the side and leaves a piece of limp fabric in front of your face. Some people don’t mind but I found the lack of symmetry odd. The thing that I like on other jackets that have the zipper up the center is there is usually a bit of a fuzzy cover for the zipper to go into. When it rubs on your face it’s fleece or something softer than the face fabric. The other complaint I had, not technical in any way, was that if you have it unzipped at all, you have a big flap on one side and no flap on the other. If it’s windy or your moving quickly this moves around quite a bit and so I ended up having it zipped up all the time to keep the flap from beating me in the face.

Aside from the interesting zipper, the rest of the jacket is killer and built with the typical Arc’teryx attention to detail. Gore Pro Shell keeps you super dry and the under-arm vents cool if you need it. 2 side pockets and a chest pouch keep your goodies organized. One of the best parts of jacket is the ergonomic cuts and velcro straps around the hands. They fit so much better than the standard straight cut. They cost more but it’s worth it.

I don’t tend to use the snow skirt much as it rides up a bit and I still get snow places I don’t want it. Bib pants are the next piece of ski gear I’m getting which prevent that.

If you’re looking for a killer Gore jacket to withstand an artillery barrage of weather, then this might be the ticket. It’s not for the ultralight crew though. That extra length and thick face fabric definitely add some weight.

If you’ve got a Sidewinder SV or are looking to buy one and have questions, throw a comment below.

0 thoughts on “Skiing on an Angle: A Review of Sidewinder SV Jacket from Arc’teryx”