There are 3 kinds of cameras these days. Phones are obviously the biggest category now as many people just have them in their pocket.

Larger cameras with interchangeable lenses are (for the most part) the only way to get very large, professional-level photos. There are lenses that can take photos from hundreds of metres away or mere millimeters.

And then there’s action cameras. These do-anything, go-anywhere cameras can be mounted to surfboards, helmets, motorcycles, or plane windows. They take videos, shoot photos and can look as good as any other kind of camera.

The GoPro Hero8 is the latest iteration in the GoPro line of cameras, arguably the camera that started the action camera industry. 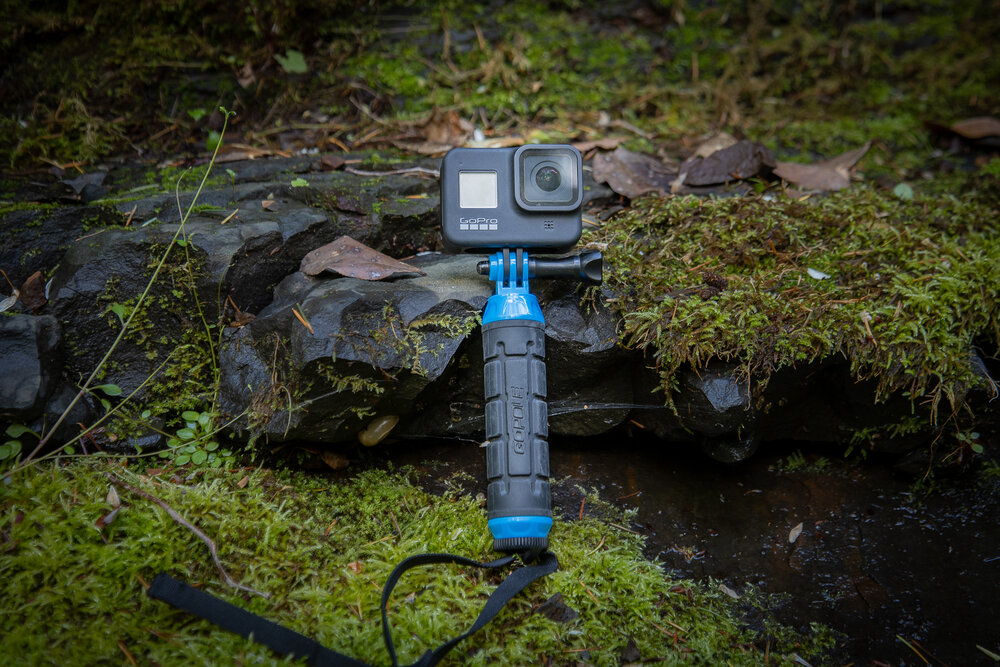 Every year the GoPro gets a little bit better. This year is no exception and it’s all adding up. They’ve managed to pack so much tech into this tiny little camera, it’s insane what’s going on in there. The next version might be able to cook food for you too.

First some specs and then we’ll break down how they all perform. 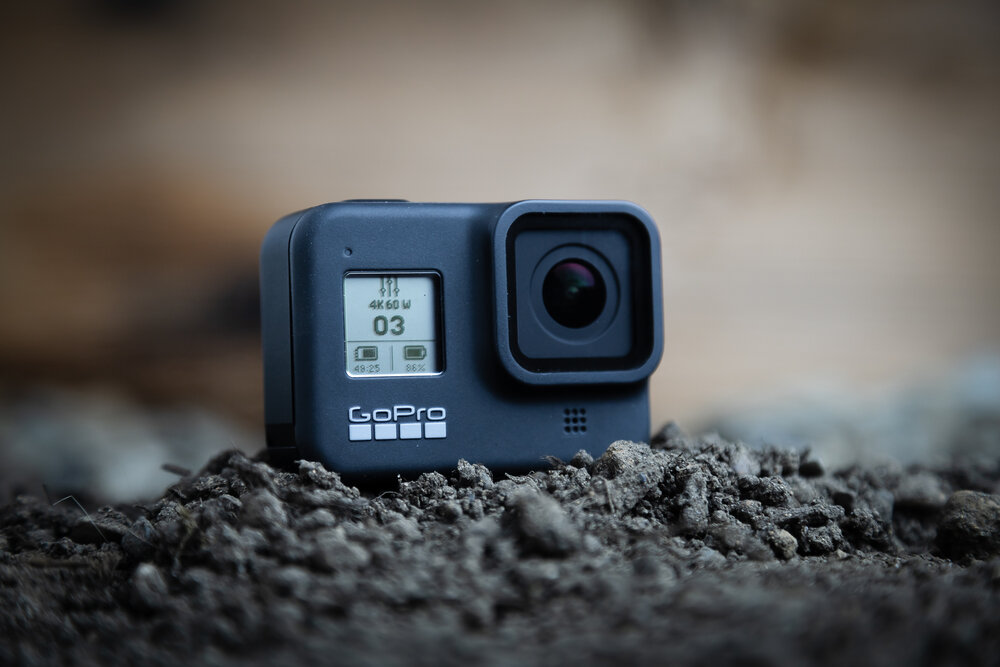 GoPro Hero 8 in the dirt showing the front screen.

Every year adds bigger and better resolution. 4K at 60 frames per second (fps) looks amazing and is just enough to get you a bit of slow motion if you slow it down to 30 or 24 fps. 4K video is still hard to work with and requires a fast computer and are big files to store but 1080 is high enough quality for most people’s projects.

Basically, you can choose from any number of resolutions and framerates for what your filming. The digital lens (how wide the video looks) will affect what video modes you can do. The Wide lens has the most options while SuperView, Linear and Narrow have less.

Manually switching through the 60+ different combinations of resolution, frame rate and digital lens takes a while. Thankfully GoPro has added a preset function that makes switching faster.

When you are out filming, just pick the preset you want, and it sets the resolution, frame rate and how wide the lens is for you. It comes with a set of default presets which you can modify and then slots custom ones, up to 10 total. I wish you could rename the presets but you can see settings they use.

With the presets, you can also choose which shortcuts show on screen and set each ProTunes setting. The shortcuts can control which digital lens you are using, slo-mo, clips, white balance, max ISO and HyperSmooth.

ProTune let’s you set the more advanced settings like shutter speed, ISO min and max, color profile and sharpness. ProTune let’s video editors who want to edit on their computer later dial in the settings so it’s easier to use in the editing suite. By default they are set for regular joes like me who just want to film and then upload.

The most impressive and useful feature of the Hero8 is the stabilization: HyperSmooth 2.0. It takes your handheld video shot and smooths it out realtime in the camera and makes it look like it was on a gimbal. Gimbals are the big stabilizers that take all the shake out of the camera and make it look like their floating. Bigger cameras need bigger stabilizers but regardless of their size they’re another heavy piece of gear to carry.

I don’t have gimbal to test with but after seeing other test videos HyperSmooth very close to using an actual gimbal. And you don’t have to carry anything else, it’s just a button right in the camera. How you don’t have to buy one if you don’t have one and you still get the super steady footage out of your Hero8.

There are 3 settings for HyperSmooth: On, High, and Boost. When set to On, it’s a bit like HyperSmooth 1.0. It crops (zooms in) the picture a little bit and provides a bit of stabilization. High is really enabling HyperSmooth 2.0 and does an amazing job stabilizing with the same crop as the On setting. The Boost setting cranks up the stabilization even more but crops in (zooms in). Higher stabilization settings drains the batteries faster.

The battery has changed a bit since the version for the 5, 6, and 7. The only visible difference is the bottom is blue and the pull-tab faces the opposite direction. Inside though they can pull more power through it faster than older models for the top end functions on the Hero8 like HyperSmooth 2.0. You can still use the older batteries but the certain features won’t work.

TimeWarp 2.0 is GoPro’s hyperlapse feature. These are essentially a moving time lapses. All the time lapse images are automatically compiled into a video in the GoPro and smoothed out by HyperSmooth.

Most people won’t sit and edit photos for hours after taking them so GoPro developed SuperPhoto, a smart camera mode for still images. Depending on the lighting the GoPro will apply HDR, tone mapping, or noise reduction to get you the best still image it can straight out of camera.

The Night Lapse mode is just a time lapse mode configured for long exposures at night. These can be hard to do with other cameras so it’s nice to see GoPro offering a mode straight of the box to do this with a few clicks. I haven’t tried northern lights with them but apparently they look epic.

The Hero8 is the first GoPro to not require any sort of case for most shooting. The first GoPro’s needed a whole case to do anything but that really limited the sound. Hero5 turned that on its head by being completely waterproof and only need a frame. Hero8 doesn’t even need a frame, the mounts are built into the bottom, no extra parts required.

If you want to go deeper than 33 feet underwater, then you need a special case for those depths. It will kill your sounds but I bet you’re recording any audio at 50-100 feet under the water anyways.

The built-in mount isn’t as sturdy as the frame, the 2 prongs can move side to side a bit even when it’s mounted tight. My Hero8 had this issue straight out of the box. It doesn’t really cause an issue most of the time. If these prongs break off, you’ll have to use a Frame mount but at least there’s already an alternative.

There’s not much to complain about the Hero8 but I’ve yet to see a perfect piece of gear. There are always tradeoffs to be made.

The lens cover is not removable. On every action camera I’ve owned, the lens covers got scratched and sometimes broken. Not being able to replace these with fresh new lens covers is going to limit some peoples use of the Hero8. GoPro is now selling small screen protectors for the back and lens cover on the front but to me this defeats the purpose of an action camera a bit. Replaceable, sacrificial parts are good.

The back screen could be bigger. The bezel around the screen is massive and the screen hasn’t increased in size from its 5.1 cm (2 inch) diagonal. The icons on the back are quite large and take up a good amount of real estate on the screen. They are easier to tap on the touch screen when they’re larger. A larger screen that takes up the whole back of the camera would be nice to see.

Apart from a couple small issues with the GoPro Hero8, it’s a ridiculously good camera. The stabilization alone makes it the best in the class. Unless you absolutely have to go for something cheaper, the Hero8 is the best video and feature set you can get right now.